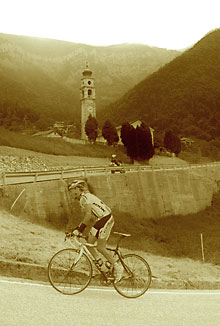 The Feltre Tbh Pedal cycling is one of the company’s historical town of Feltre, certainly the one with the largest number of members (about 200) are currently in the Belluno and one of the most important in Italy.

The history of Feltre Tbh Pedal and Great Fund is a group of friends fond of bicycles, which are often found together to climb the nearby Dolomites Belluno having fun with friends.

There are a dozen or so back in 1988, in the end they decided to form a new cycling team.

The first affiliation was in 1989.

By the time the handful of cyclists grows up to fifty units, together we must make the very first large fund that are held in Italy (the Fausto Coppi, the Nove Colli …).

The friendship and passion for cycling are the glue of the group in the mid-90s began to toy with the idea of ​​organizing a large fund in the first person. Fate brings the pizza of the then Vice President Ivan Piol (current president, 19 years) where the stonemason Valentino Campagnolo (son of Tullio, the inventor of the quick release) had commissioned a monument to the memory of his father to be placed in the passage of the Cross d’Aune (not far from Feltre), to mark the place where Cicero had the brilliant idea.

The marriage-company Campagnolo Pedal Felt was immediate and in 1995 came the first Gran Fondo Campagnolo International.

Since 2008, the Committee decided to forge a strong alliance with the new territory and created the partnership with Sportful, the world’s leading cycling clothing, why change the name of the event in Gran Fondo Sportful.

In 2009, the Dolomites are recognized world heritage site by UNESCO and the organizing committee decided to honor them by changing the name in the Dolomites Sportful Race saw that 90% of the route through the UNESCO site.

In 2000, the Committee decided to devote an important space for children, the future of cycling. Cue the first Mini United Fund of Italy in 2001 to become Mini Gran Fondo Sportful. This is in effect a large fund … but suitable for children: with race packet pick, gadgets, starting, mechanical and medical assistance along the way (two, one for children), relay races, refreshments, awards and pasta party. The formula, and like every year at the start there are kids from all over Italy 1000-1500. Godfather for many years the race was his friend Franco Ballerini, affectionate to those young people who loved to accompany the streets of Feltre. Since 2010, the Mini also bears his name.

In 2001, the Committee once again launches a new challenge that will make school the rest of Italy and invents the first 24 hours on the road, creating a picturesque street circuit in the heart of Feltre. Castelli24h, is a marathon team (relay) on the pedals that fascinates and soon becomes irresistible: the first year there are 27 teams, the second 52, third 74 and then gets her always share 100 forcing the organization to put a roof precisely to 100.